The Questions of ‘Save and Spend’

The Questions of ‘Save and Spend’ 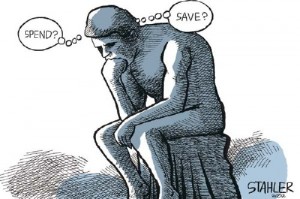 It’s ironic, isn’t it? Families are advised to save money. It is important to have an emergency fund and provide properly for retirement. Yet at the same time there has been concern expressed that there is too much saving and therefore the spending required to boost the economy isn’t taking place. Well not at the levels required even though statistics show there is extensive credit card debt. Perhaps the spending is going on everyday things such as groceries? Whatever the case, there is a definite dilemma. Savers cannot expect too much growth while interest rates are low though the markets should be performing well enough in the medium term. Those who do not save for the future while likely find things difficult as they reach retirement. The Social Security System is no guarantee.
So what is the answer? Ordinary people do not necessarily understand the principles of economics.

Borrowers Are Benefitting
There’s little doubt that borrowers benefit much more than savers when interest rates are low. That is a compelling reason why if you are carrying high interest rate debt like credit card balances you should take advantage because just right installment loans are readily available if you have regular income and your request looks realistic. In essence it is that you appear to be able to afford the instalments for the term of the loan. You need not worry if you have a poor credit score. While some traditional lenders use that as their main focus, today’s online lenders don’t; they may charge a higher rate of interest because of the extra perceived risk but the rate will still be much lower than that applied by credit card companies.
Those who decided that real estate was a good way to build up their assets found that the recession but their hopes on hold. In almost all cases real estate values dropped and those who had bought in the previous few years expecting growth faced problems. Mortgage companies required little in the way of deposit and in some cases mortgages were available where borrowers could obtain more than the current value of the property. The result was widespread negative equity and foreclosures where borrowers could not maintain their payments.

Real Estate for Retirement
Circumstances have improved and growth has returned. In the medium to long term real estate growth should be certain and a family seeking to build assets should rightly expect that it will happen. In this case spending on a mortgage is generating growth in the real estate market though not necessarily in the economy as a whole.
Someone relying on the value of the house to fund retirement however faces a number of issues, not least the fact that the value of the home has to be realized and alternative accommodation obtained. It is great to have money in real estate but in reality people should be looking to contribute to retirement regularly and from an early age. A 401K where employers contribute as well makes absolute sense. Compound interest creates good growth over the years even at single figure percentages.

Start Early
A $100 a month over 20 years at 8% will produce a sum around $50,000; anyone putting that away from their mid-twenties will have that figure by middle age, the time when some are only just starting to think about making plans for retirement. Imagine if that $100 was increased every five years by a further $50! It is a figure that should be eminently affordable for someone in regular employment. While 8% may not be available by putting money on deposit it should be by taking a fairly conservative approach and investing in the S&P 500.
Everyone deserves a comfortable retirement and it is important to remember that people are living longer. While the Social Security System is in place there are a number of issues for the future because the funds coming in will not be able to sustain current benefits without some changes. If the System is just part of the finance for retirement then the chances of a comfortable retirement improve enormously. It isn’t necessary to be an economist to understand the common sense in thinking about the future. It doesn’t necessarily involve sacrifice but it will involve ‘peace of mind.’

Mistakes to Avoid When Consolidating Debts
Better to be safe than sorry - Home Insurance at Christmas
How to Reduce the Chances of Your Small Business Going Bankrupt?
TAGS :
retirement
PREV POST

Borrowing Is Getting Easier Fo..

How To Take Your Own Business ..