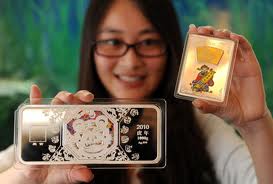 This is a Guest Post from my Canadian buddy Joe who is seriously clued up on trading in metals, specializing in silver trading. We met in Australia and his knowledge of this industry astounded me.

So what is money?

Gold is flying from west to east as we speak.  Over 50% of the world’s currency is in US dollars and they are involved in over 60% of world’s trades to settle differences; the petro dollar being the main one.  This is why all commodities are price in dollars.   Much of the world has slowly been moving away from US dollars.  Countries have been signing deals with china to trade currency for currency (for example in 2011, China and Japan signed a deal where they settle trades (Yen and Yuan) with one another, bypassing the US dollar).  This is huge because China and Japan are the world’s second and third biggest economies via GDP.  Even England recently signed a deal with China and brought over approx. 30 billion pounds worth of Yuan to settle trade differences with the Chinese.

Another major development recently is China has just surpassed the US for biggest importer of Saudi oil.  China also has a major deal with Russia, that Russia supplies much of Chinas oil needs.  China has slowly been pushing for a new world reserve currency.  They want to “de-Americanize” the world.  But China is also playing with fire as it is the biggest holder of US debt outside of the Federal Reserve.   The Chinese have been trying to spend the dollar without causing a panic.  If there is a panic on the US dollar and everyone tries to sell them at once, then the dollar would be worthless.

The US still has a while as the reserve currency as there is no other currency that can take its place at the moment.  The Chinese would love to but they don’t have a bond purchasing systems that can rival the American one.  There is not enough Yuan to do this.

Gold has been the most stabalist currency since money use 5000 years ago.  It would only make sense that the world realizes this and comes back to it.  The current system has only been around for about 40 years and has been in trouble since the get go.  No one ever really trusted it if you look at charts of gold going back.
I think we’ve seen the first leg of the gold bull market from 02 to 11.  We are now in a consolidation phase.  Gold may yet go down from here a little more.  I would be surprised to see it go down to absolute worst case scenario $1000 (I give it like a 2% chance).  But inventories at the COMEX are low as china and other Asian countries buy up everything they can.  I’ve even come across that JP Morgan bank is starting to collect gold.  If that’s true we’ve probably seen the bottom of the market.

If we add up all the debt in US dollars and what the US has in gold reserves, to pay it off gold would need to go up to 50-60k an ounce.  I think if there is a parabolic move like this in the price that simply no one will accept dollars for gold.  A country that is willing to step forward and say there currency is backed by gold or some other commodity like oil will come out on top but they will probably face the wrath of the American military.

4 Tips For Making Money Off Your Blog From Day One
What to Avoid When Choosing an Investment Broker
Annuity Rates on the Rise
TAGS :
gold
PREV POST

How to invest in precious meta..

Getting divorced? Beware the f..