How to Use Elliot Wave Strategy in Day Trading

How to Use Elliot Wave Strategy in Day Trading 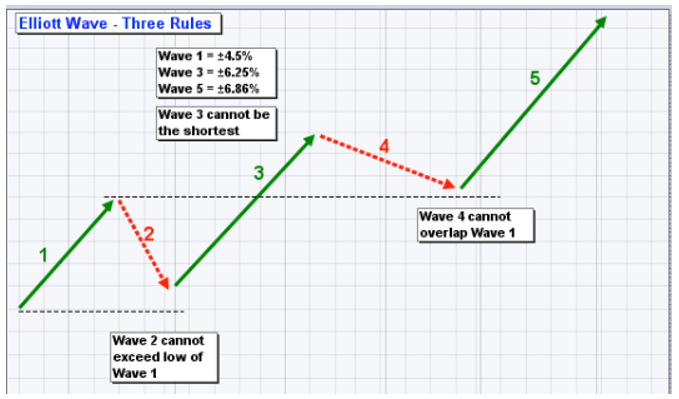 The reality of financial trading is that being a successful trader is hard. It is the main reason why most people who try trading will fail eventually. To succeed, you need to take time analysing how the market works. Then, you should develop a strategy that matches your risk appetite. For example, if you are focused on long-term trends, fundamental analysis can help you make decisions. If you are focused on day trading, you need to be good at technical analysis (see this guide for more details), which will help you understand the different chart patterns.

A common strategy used by advanced traders is Elliot Wave. This article will explain what this approach is and how you can use it in your trading.

What is Elliot Wave?

Elliot Wave was developed by Ralph Nelson Elliot in the 1930s. Elliot was an accountant, author, and a close watcher of the stock market. After suffering from pneumonia, Ralph was confided to his bed, where he spent most of his time studying market charts. While doing this, he started observing patterns, which led him to develop the Elliot Wave theory. He published his ideas in his first book, The Wave Principle.

According to the theory, when the price of an asset demonstrates an underlying trend, it will mostly develop in five waves. The three waves that move in the direction of the trend are usually labelled as 1, 3, and 5. These waves are called impulsive waves. The two counter-trending waves, 2 and 4, are called corrective waves. Once the five-sequence wave is completed, a correction will be formed. The correction develops in three waves known as A, B, and C.

How to Use the Elliot Wave Strategy

Elliot Wave can be applied to all asset classes in all timeframes. It can also be used in trading software Metatrader and web-based trading platforms provided by brokers. It is usually recommended that you implement the strategy using candlesticks, instead of the bar and line charts.

When applying the strategy, you first need to analyse the chart and observe how the price is behaving. For example, it is not recommended to apply the strategy in ranging markets or when the price is in consolidation phase.

You should then analyse the key points of the wave. In the example below, an impulse wave is applied in the GBP/USD pair. In this chart, the most reasonable outcome for the pair is that it will continue moving lower to the 1.2945 level, which is also the 38.2% Fibonacci Retracement level.

From this chart, there are a few steps required to ensure that the Elliot Wave strategy is applied correctly.

First, the first wave happens after a major market trend. Therefore, it is not ideal to start drawing the waves when the market is in consolidation. Then, the second wave cannot retrace more than 100% of the first wave. Next, the third wave cannot be the shortest of all the impulse waves. It is usually the longest. Fourth, wave 4 cannot overlap the first wave. As a reminder, a summary of this is shown in the chart below.

Here are some other rules you should follow when implementing Elliot Wave. When the third wave is the longest, the fifth wave will mostly be equal to the first wave. Also, there is usually a close relationship between the second and third wave. If the second has a sharp correction, the fourth will have a flat correction and vice versa. Also, After the fifth wave ends, correction waves usually end in the area of the fourth wave. In between the longer impulse wave, it is possible to have smaller Elliot Waves.

Another important thing about Elliot Waves is that it works best when used with other technical tools. The most common tool is Fibonacci Retracement. This is available in most trading platforms and is drawn by joining the extreme high and the extreme low of a security. By doing this, you will have a clear picture of where the price could move to.

In conclusion, the Elliot Wave is a strategy used by many professional traders. Although it is not 100% perfect (no strategy is), it has proven to be an invaluable tool to traders. To succeed at it, you first need to learn the theory by studying existing literature, then apply it in a demo account.

The Different Avenues for Investment
ICE LIBOR: Everything Forex Traders Need to Know About These 2 Acronyms
Here Is What You Should Know Before Delving In the World of Online Trading Using the Different Platf...
PREV POST

How to Reduce the Chances of Y..

A beginner’s guide to Hedging