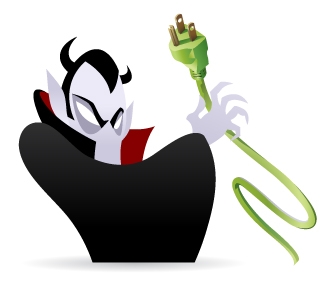 The word vampire conjures up images of fangs, black capes and stocking your homes with crucifixes and garlic. The stereotype that should be attributed to vampires is stealing money from your wallet. The modern vampire is stealing energy through your electrical sockets, the term ‘vampire’ energy or sometimes referred to as ‘phantom’ energy is the power used when a device is not ‘off’ but on ‘standby’. A lot of people think this is solved by simply turning your television off by the power button rather than with the remote, however it’s much more likely that your phone charger which isn’t charging anything is why your electrical bill is so high. Vampire energy has been estimated to be around 10% of the electrical energy used by a typical household, so by metaphorically ‘staking’ this vampire energy you could save up to 10% on your bill. So how do we do this?

The best way to catch this vampire energy is to track it. A plug-in meter, such as the Kill-a-Watt meter, will enable you to hunt down the worst offenders. Some equipment uses a lot of energy because it’s old or inefficient, appliances like refrigerators which have to be 24/7 could be pouring money down the drain if it’s an old model. Replacing these will save money in the long run and it’s a good investment. Whilst you may not find any big discoveries if you’re technology is up to date, you can still find out what’s the biggest energy drain in your house, if you leave your phone charger plugged in all day then you can figure out how much that’s actually costing you. An energy meter can make you more aware of your consumption and make you think about how you could make a change.

Once you’ve caught the vampire energy, you should be able to figure out how much it’s costing you in electricity bills. If you’re energy usage is actually quite low, it may not be a problem with vampire energy, you might just be paying too much for electricity. Depending on what tariff you’re on or who provides your energy, you may be getting overcharged, Energy Helpline can help you figure out how much money you should be paying.

Killing vampire energy is easy once you’ve caught it and accessed it. If you have old microwaves or fridges, it’s likely that they are draining lots of energy, the only way to deal with that is to metaphorically kill it but actually kill it by chucking it out. If you find that your energy is being drained by chargers or consoles then a simple power strip or extension cord makes it easier to turn everything off without going round and turning electronics off individually. If you appliances that are rarely used but are always on standby, then unplug them, it may a bit more effort when you eventually want to use them but your wallet will thank you.

So get out there and slay some vampires!

Mobile Phone Tricks – How To Save On Mobile Phone Costs
How to be clever with credit cards - the 4 golden rules
Credit Card Debt in the USA: Top 8 Ways Tips to Cut it Down
TAGS :
bill
PREV POST

How to invest in precious meta..